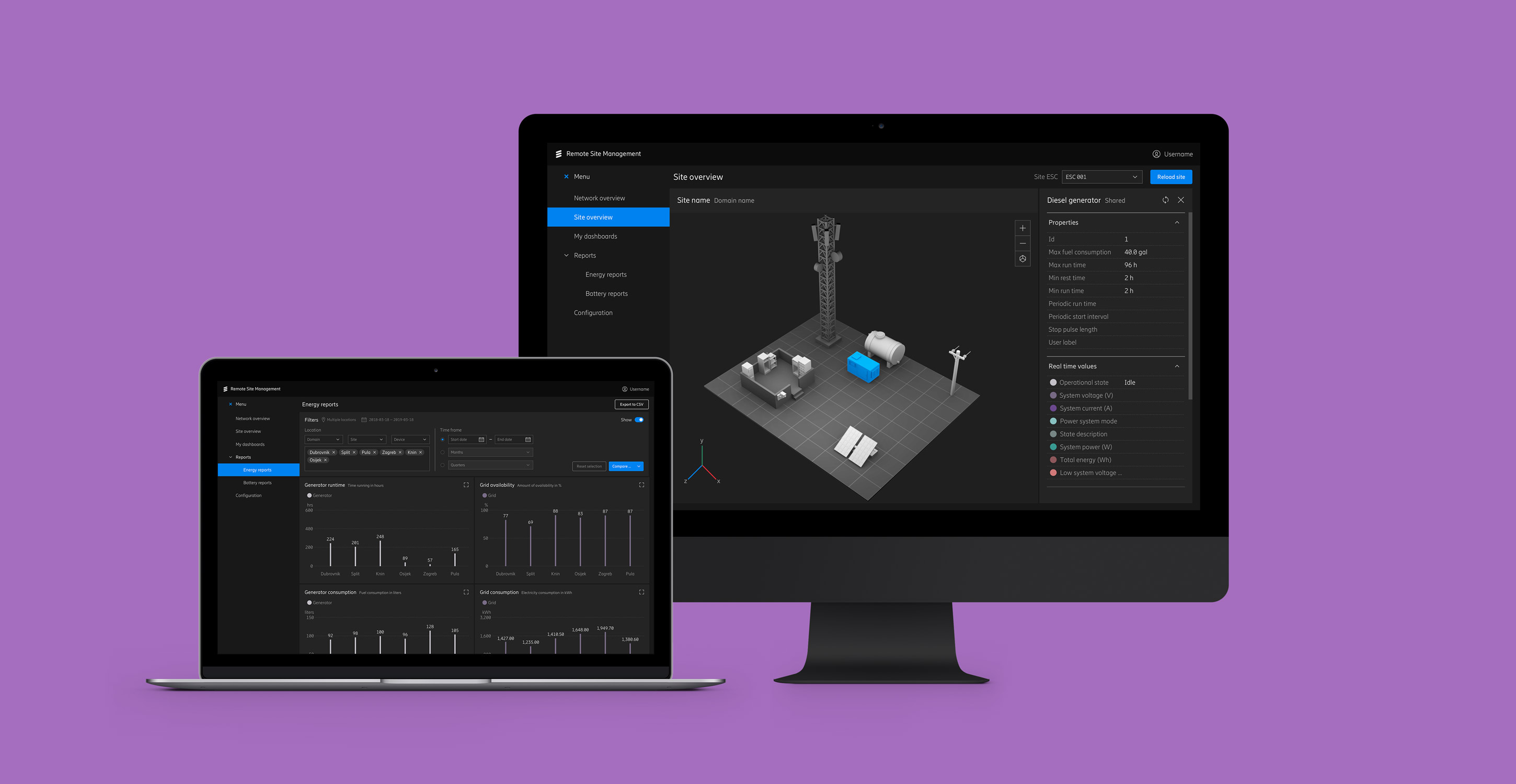 At the beginning of 2018, I joined a project for Ericsson’s Remote Site Management solution. Together with another designer, I got the opportunity to collaborate with technical leads and improve several use cases. In the year that followed, I was invited to continue the project. This time, I got work with a development team in Croatia. Our efforts eventually led us to make the new version of Remote Site Management.

At the start of the Remote Site Management project in 2018, our first initiative was to host a workshop with the project stakeholders. We wanted to gain an initial understanding of the current solution, the users, and their tasks. At the same time, we felt we had to give an overview of our Ways of Working. Allowing the participants to get onboarded to the User Experience field and Design Thinking.

We learned that remote site management lets a user monitor a network site (or several) without being within its proximity. Normally, a user would work and be located in a Network Operation Center (NOC). The Ericsson solution features an IoT device called the Ericsson Site Controller. With it, various objects can be connected and managed. These “Managed Objects” include equipment such as diesel generators, fuel tanks, and solar converters.

The 2018 project outcomes were proof of concept visuals and prototypes using the new brand. Apart from the rebranding, our focus had been to improve use case interactions and flows. For example, we had looked at the installation and configuration of the Site Controller. Similarly, we had rearranged the data on the main dashboard to create a better summary for the user.

In 2019, I was invited to work on the project again. Early on, I received contact information to personnel in Ericsson’s network operations center in Romania. Therefore, I start booking interviews to validate the knowledge that I had previously gathered in the project. Thanks to these interviews, I could define somewhat of a persona. One of my findings was that alarms related to fiber cuts were the most common – consisting of around 70% of all alarms. 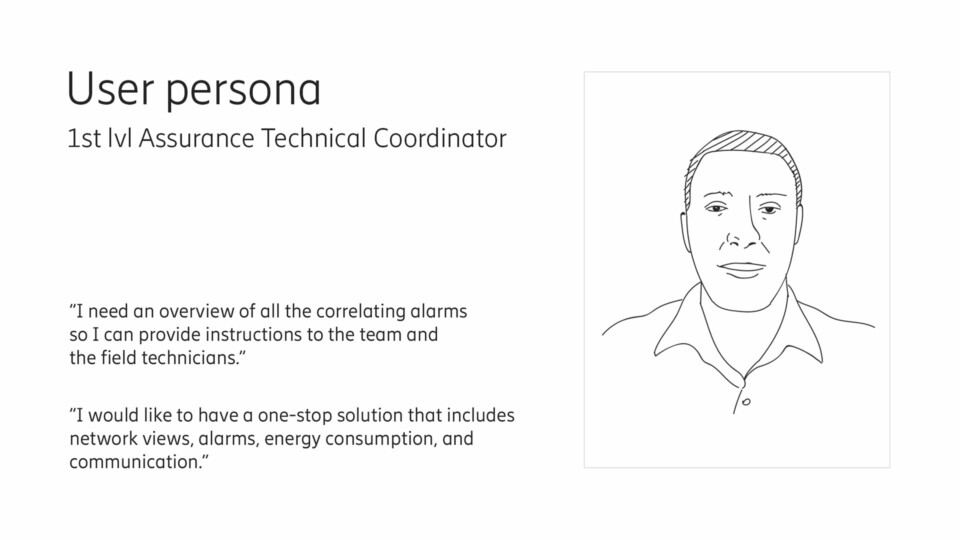 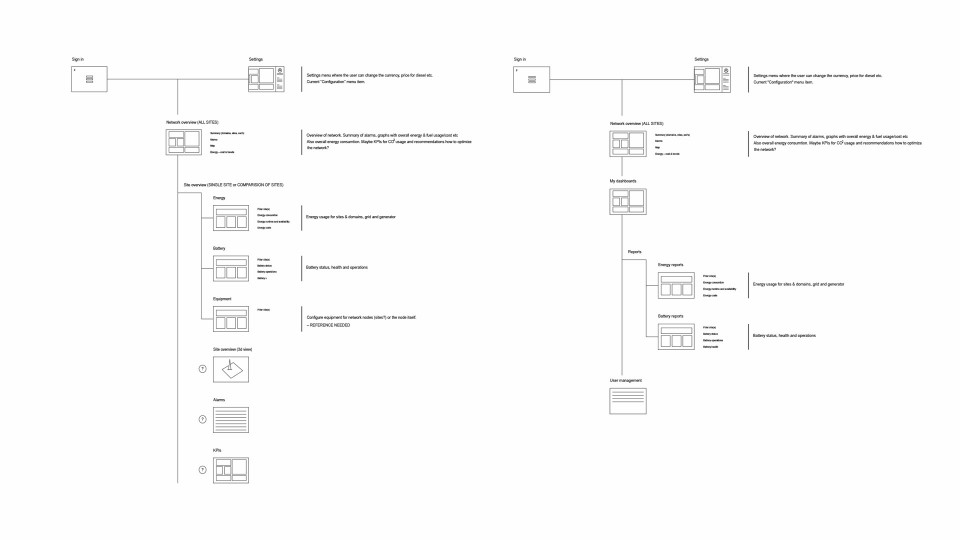 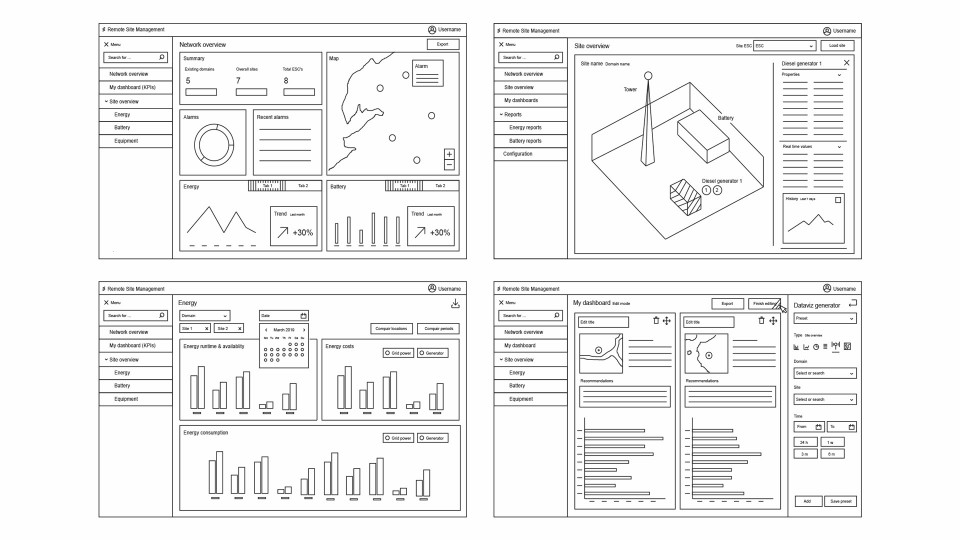 At the same time as the user research, I initiated discussions with the development team in Zagreb in Croatia. The team had already begun to build a new, web-based version of Remote Site Management. Based on an even older Java-based software. Unfortunately, the implementation had very much focused on new features instead of a user-friendly interface. My first assignment was to design a new structure and merge sections. Simultaneously, I began to create new components. It was important that the new solution would be easy to navigate and understand. Additionally, it would need to have clear actions and use familiar data visualization.

I started the design work by doing wireframes. One reason was that it allowed us to explore broad design ideas without going too much into details. Apart from creating a new hierarchy, I also sketched different ways to display information. 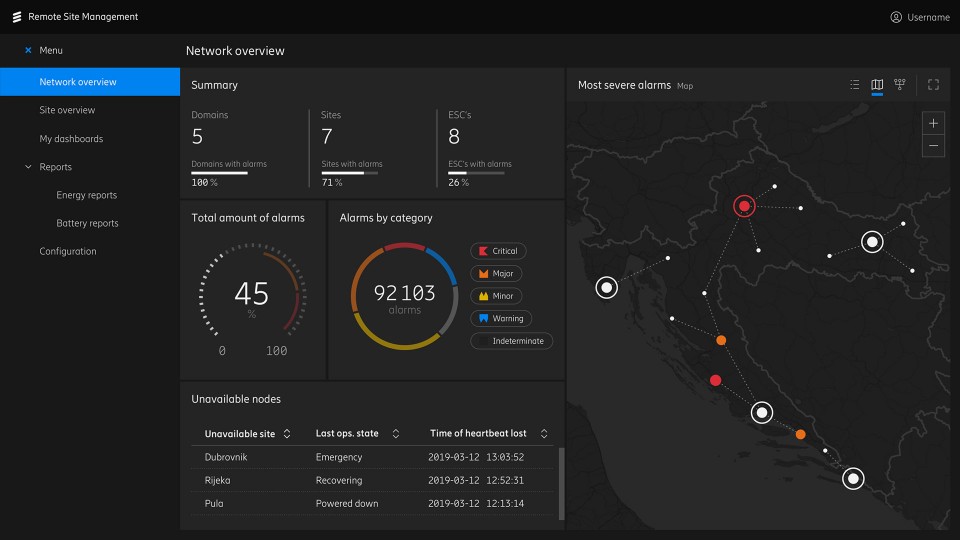 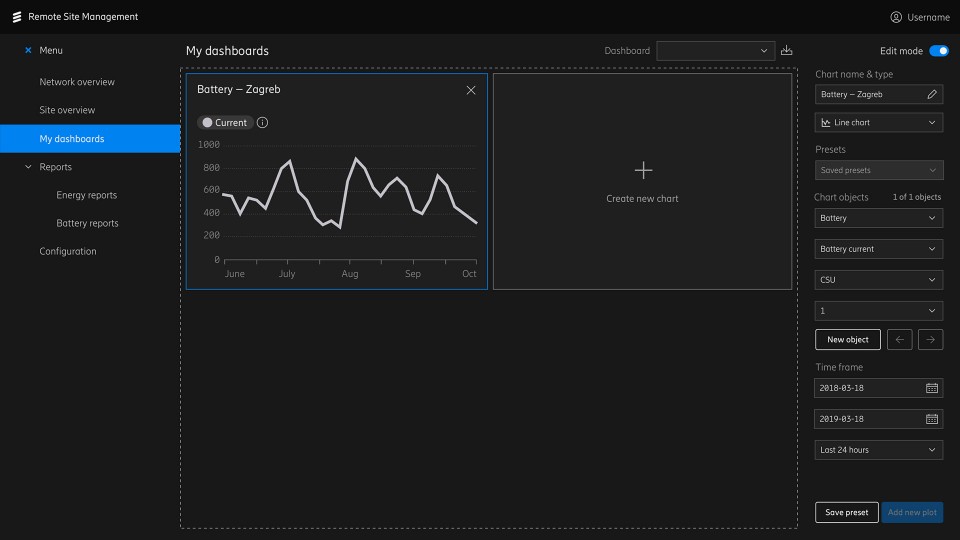 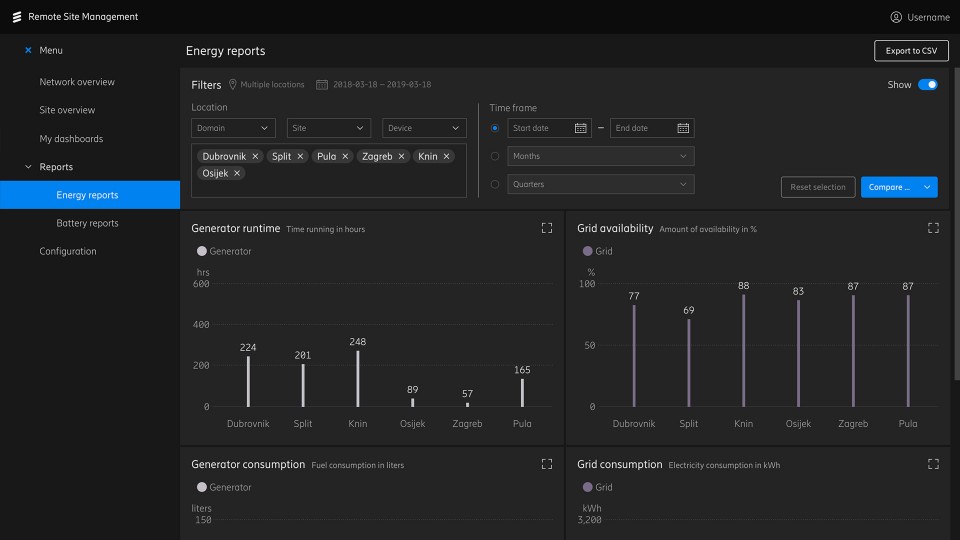 What followed was the conversion of the low-fidelity wireframes to high-fidelity visuals. As the project was following a tight roadmap, we felt we needed to make some prioritization. We agreed we would prioritize the Energy report and Battery report views. The report views would allow users to get an overview of a site’s energy and battery status. In addition, a user would also be able to compare several sites. I also designed a customizable dashboard section. On it, users could generate and save charts from desired managed objects in the network.

The Network overview would remain similar to the current implementation. Although with updated visuals. The main addition was a map that showed all network nodes with alarms. Additionally, I included an option to switch between the map to a list and topology view.

My last big contribution to the new Remote Site Management was the design of the digital twin feature. In 2018, one of the outcomes had been a concept that showed site equipment in a 3d view. This concept had been received well by the stakeholders. Therefore, it was one of the top priorities when the development began.

Since the 2018 concept was an exploration, it had not been constrained by technical limitations. When I started the design of the digital twin, my first task was to gain insights into the Ericsson Site Controller functionality. Secondly, I needed to know more about the supported managed objects. Once I had gotten a good understanding of the technical needs, I started with the visual design and 3d modeling.

The 3d modeling took me around two weeks to complete. In the end, I created 10 different 3d models. Apart from a generic model of a telecom site with an included tower. Since I had no instructions to follow I made sure the design followed the general Ericsson brand guidelines. I used simple geometric shapes and clean angles. In the same way, I also made sure that the style would fit with the rest of the Ericsson Design System visuals.

At the same time as I created the models, I worked on some screen visuals. I also created a prototype with a side menu that would appear if a user were to interact with one of the 3d models. The menu would give a summary of the object’s properties, such as run time and operational state.

The new demo for Remote Site Management was complete over a period of 5–6 months. All that was involved in the project expressed that it was a success. 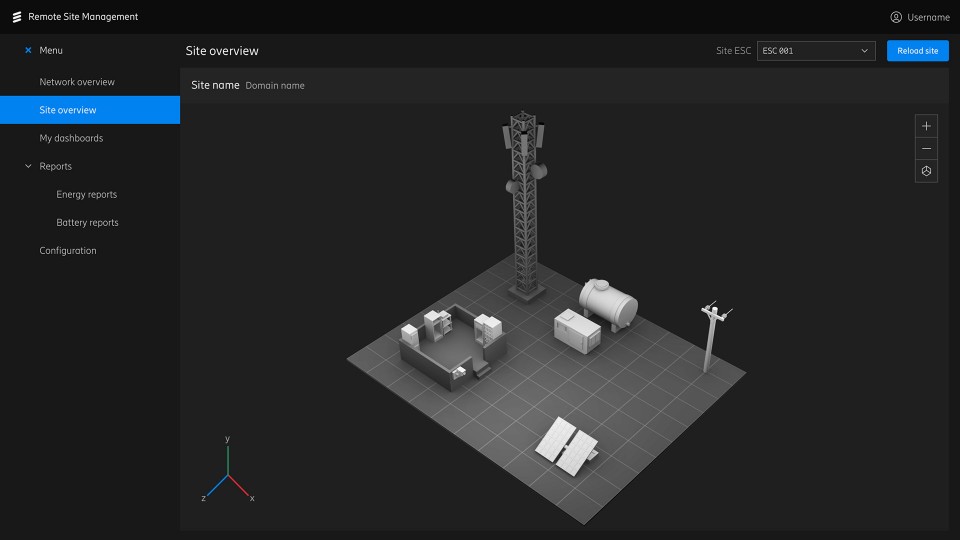 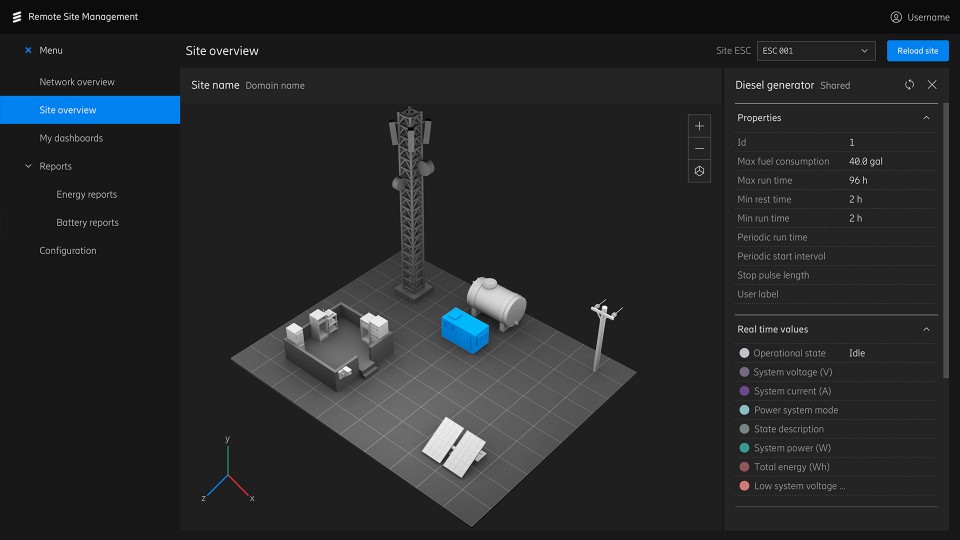 We received almost exclusively positive feedback on the design of the application.